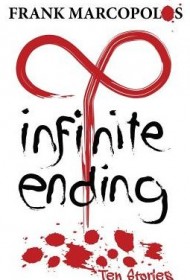 These promising but inert short-short stories by Austin, Texas, author Frank Marcopolos feature a range of characters and situations.

Readers encounter a failed actress obsessed with organic foods and a pair of supercilious young women who’ve made a fortune cranking out erotica for a demanding editor. In three of the stories, a thoughtful baseball pitcher named Enzo Prinziatta does battle with his fastball, his love life and an uncertain future. Three hard-drinking, bewildered Army paratroopers feature in a pair of dark tales that have real dramatic potential.

These are rich prospects for fiction in any mode. But the alert reader must ask if Marcopolos is not a prisoner of fashionable literary theory who comes up short in practice. He ends his slender book with two short essays in praise of postmodern writing devices (magic realism, temporal distortion, intertextuality, etc.) and how they apply to libertarian political thought, and that approach infects the 10 preceding short stories with crippling self-consciousness.

In “Storytime,” a writer wrings his hands over the notion of “objective truth” and wonders aloud: “Well, if stories shouldn’t have a message, what should they have?” In “Fighting Chaos,” a paratrooper agonizes over Nietzsche and morality like a college sophomore and in a later story, “Conflation,” wonders about the wisdom of jumping out of airplanes. “Silly fictions needed to be conjured,” he concludes.

The allure of great postmodernists like Borges, Vonnegut and DeLillo often does harm: Lesser writers can imitate a style but not the mind that made the style. Marcopolos has solid fictional instincts and a gift for language (“The September night air smelled faintly of damp pine, chilly and clean . . .”). His talents certainly offer satisfactions here. But he might find greater success by purging the murky writers’-workshop theories in his head and getting on with the important business of finding his own voice.