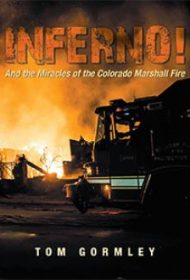 Tom Gormley’s Inferno! And the Miracles of the Colorado Marshall Fire recaps the devastation wrought by the massive December 30, 2021 fire that swept through Boulder County, Colorado. “In a little over four hours,” writes Gormley, the Marshall Fire, “fueled by high velocity Chinook winds, burned 6,026 acres, consumed 1,084 structures and damaged many more.”

In his coverage of the fire, Gormley takes a multi-faceted approach, describing the history of the area, the fire’s possible causes, steps taken to fight it and the people involved, routes taken by evacuees, and personal accounts of some of the victims and firefighters. Throughout these braided stories, Gormley never loses sight of the driving winds, heading most chapters with wind reports (“Marshall, December 30, 2021, 11:00 a.m., Wind WSW 98 mph, Gusting to 98 mph 40º F”). This wind-consciousness drives and connects the narrative even through informative sections on water rights, electrical plants and transmission lines, and still-burning coal seams.

The book has a coffee-table format, and Gormley has included numerous photos and maps depicting the fire’s many paths and details of the buildings destroyed in the towns of Marshall, Louisville and Superior. The most riveting accounts occur when residents and firemen describe their experiences. “It was almost like we were going into Armageddon,” states fireman Brian Melzer, discussing his drive toward Harper Lake in Louisville.

Although Inferno is well-researched, it has a few issues: There are numerous tense problems, and a page concerning two of the victims is oddly placed by itself, instead of with the narrative that appears later in the book concerning victims. Also, the author repeatedly uses the word “miracle,” appearing to regard any favorable circumstance as miraculous. Such frequent exaggeration robs the word—and subtitle—of its meaning.

These problems aside, this book provides a valuable look at the historic fire and would be a worthy addition to any collection on Colorado history or firefighting.