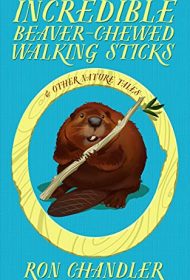 In the book’s first two stories, an 11-year-old girl’s pluck and determination save her favorite horse from the slaughterhouse, and a boy who’s hunting geese with his father decides to spare a bird that’s at his mercy. The collection’s subjects are diverse, however, and subsequent stories offer human and animal perspectives, often presenting a moral in an exciting or amusing way.

The book’s subject matter, tone, and length are perfect for middle-grade readers making the jump to more serious material; the text is challenging without being overwhelming. Young characters face the aftermath of a mother’s death or the complications of Obsessive-Compulsive Disorder (OCD), and parents don’t always know best, but there’s always a support system in place for a happy, satisfying ending. The author’s deft hand can be seen in “Curse of the Buried Treasure,” which takes on creationism, but does so in a humble, light-hearted way.

Chandler’s writing provides many vivid descriptions of natural settings. For example: “As he strolled along the Annapolis harbor toward school, the rising sun poured molten gold across its sapphire surface, which gleamed like a gem.” Settings like horse tracks, parks, beaches, and rivers are depicted convincingly.

There are occasional awkward moments, as well, such as the confusing description of scoring in a dressage competition: “Scores were given on a basis of 1 to 100 with 10 points tops for each movement the horse could execute.” And it can be hard sometimes to initially discern who is narrating each story. In “Going to the Dogs,” for instance, one first assumes the tale is told by a school-age child, but details in the text later cause one to suspect the narrator might actually be an adult.

Such issues aside, this is largely a sweet, charming compilation of fictional tales inspired by interactions with the natural world.