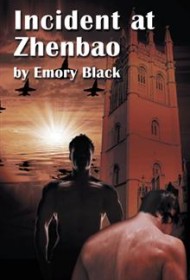 After finishing Emory Black’s Incident at Zhenbao, you wonder why it wasn’t simply titled Fifty Shades of the Thin Gray Line.

In the story, 18-year-old Tom Hamilton flees an abusive home for an East Coast military academy. He’s bent on showing his mean stepfather that he can be a man, not the sissy he’s perceived as. Yes, Tom is attracted to men, but he’s convinced Ridgeston College will put the straight into his gait.

If only. Within 24 hours of arriving on campus, Tom has sex in the shower with a classmate and falls for his dorm master, a 28-year-old Marine named Mike Kelly with an elusive past of his own.

Incident is a gay coming-of-age novel, equal parts sex and angst. The first half finds Tom coming to terms with himself and his desires. The remainder takes him to the one place he’s long dreaded: Southeast Asia. The book is set in the ’60s, when suggesting “Don’t Ask, Don’t Tell” would’ve gotten you burned at the stake.

Black is a talented writer who occasionally elevates his prose to exceptional – not with the steamy sex scenes, which evoke the aforementioned Fifty Shades, but he’s able to zoom in on select characters, say butch-to-a-fault Mike Kelly, and invest them with a level of depth lacking in most of the others. Sadly, Tom is among those with development deficiency. He’s got a persecution complex that won’t quit — at least not for the first 150 pages.

None of which makes Incident at Zhenbao any less readable. Even when characters irritate, they manage to fascinate. You care about Tom and his journey. You just wish he were less whiney in getting there.