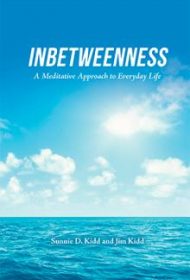 In an optimistic, encouraging, and poetic way, Sunnie D. and Jim Kidd explore how to be a dreaming, feeling, caring individual in the current, technology-dominated world.

Inbetweenness is defined in the Introduction by Ramakrishna Puligandla, Ph.D. as “the interconnectedness of all beings.”  In 20 short chapters, the authors, philosopher Sunnie and her professor husband Jim, use nature imagery and manmade infrastructure to explain the concept of “Inbetween, a dwelling place of the imagination, a world of sensing, feeling and understanding the harmonies….”  They propose a way of living centered on reflection that unleashes memory and imagination. They don’t disparage progress, but warn against losing critical social interaction in an age of automation.

The Kidds use a butterfly’s seemingly erratic turns and swoops, dependence on the currents, and bewitching invitation to follow as a metaphor for “a return to the fields and the feels [sic] of a universe that seems alive.”  To live like a butterfly is to reject the relentless pace of the race to monetary gain, recognize that change is inevitable, and enjoy playing with the beings around you.

Similarly, the Golden Gate Bridge, which connects two sides and still facilitates a constant flow of the sea and boats below and the people crossing it, represents how being open and reaching out to others allows us to share and contemplate a variety of ideas while feeling less alone.

Some ideas here will be familiar to seekers (e.g., “sitting in silence,”  and “resonantial harmony,”), but they are expressed in a lyrical and cheerful way that feels fresh. Often, the sentences run too long and readers lose the thread of the thought. The poetic voice is still enjoyable to savor, but the book would have profited from some judicious editing.

Despite such issues, Inbetweenness is a gentle, uplifting invitation to “[turn] toward one another in an attitude of authentic care.” Readers yearning for deeper, more fulfilling connections will be fortified.