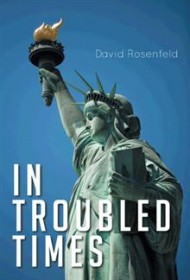 In Troubled Times by David Rosenfeld is a book of energetic poems exploring the requirements of American patriotism.

Many of Rosenfeld’s pieces take their energy from the use of opposition and contrast, such as “Rebuilding,” a poem about striving to bring democracy to the Middle East that uses contrasting temperatures to express morality: “The icy chill of evil will / Not penetrate our coats; / For warmth of goodwill radiates / Secure, from man who hopes.”

Often, the poems are animated with kinetic energy and sounds. “More to be Feared,” for example, compares lightning and thunder, “The one cracks the sky, bedazzles the eye, / With sinister looking flashes; / And raises the hair in ionized air, / To knife its way to where it slashes.” Here, Rosenfeld shows his poetic chops with internal rhymes “sky” and “eye” and “hair” and “air.” The poem uses rhyme to emphasize strong words and employs the more subtle slant rhyme of “layer” and “there.”

Sometimes, however, generalities keep the pieces from being truly special or unique. One example is “The Veterans,” which honors “[t]hese zesty old zephyrs, / So spry and alert,” but never differentiates them as individuals or veers from basic hero worship to explore more complexities.

A few poems seem to be mostly rants. “The Paranoid Voice of Reason” is jingoistic and runs on stanza after stanza: “If they fail, / Then Israel / May disappear / From Palestine; / Along with Palestinians, / Jordanians, Egyptians, / Syrians, Libyans, / Lebanese, and Christians.” And some sacrifice natural syntax for the sake of rhyme: “Some will die in battle where they’re sent –/ Is this the message Christ for us had meant?”

Still, Rosenfeld has crafted these poems with care and some skill. While his poems won’t be for everyone, those invigorated by his enthusiasm and passion will find pieces to appreciate here.