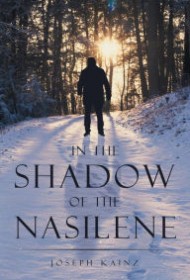 Joseph Kainz explores the effect of underestimating a foe in his fantasy novel In the Shadow of the Nasilene.

In this story, expert healer Rachel Harversian is kidnapped by a group of Nasilene, the ruling class of lords with varying levels of magical abilities and an unwavering desire to gain more land and power. Rachel soon realizes that the reason they are so hell-bent on kidnapping a beautiful, intelligent healer is to increase their population of young men with powerful magic skills.

Wilkarian, a mysterious boy with strength, speed, and impressive healing powers, single-handedly saves Rachel from the Nasilene. Learning that the Nasilene have a bounty on Rachel, the duo travel through the wilderness for months, scheming to outsmart and kill their enemies, which eventually also include vicious changelings called Krenyk. Their effectiveness is complemented by their knowledge of herbs and how to survive in the wilderness.

With clear writing, the author constructs a frightening world in which the Nasilene rule through fear and violence. The fight scenes, in particular, show a keen understanding of combat and are entertaining to follow. Rachel and Wilkarian’s backstories, divulged entirely in their own words, show a thoughtful understanding of storytelling and character development.

Still, there are several flaws in the narrative. The author often makes sudden leaps in the storyline. For example, after a detailed lead up to Rachel’s foray into a nearby town to scavenge for supplies, the actual event is summed up in one sentence: “Her foray into Leath had gone without a hitch.” Irrelevant plot details also bog down the narrative. The first 63 pages focus on Rachel’s original captors and her healing process. But what happens in these pages has little bearing on the rest of the plot.

Despite its flaws, the book offers many rewards and may intrigue readers seeking a suspenseful story in a unique fantasy world setting.