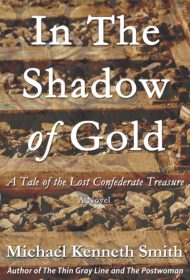 In the Civil War’s closing days, a train loaded with the entire Confederate treasury raced out of Richmond, the South’s capital, just ahead of advancing Union troops. When the troops captured the train weeks later, its kegs of gold and silver had disappeared. Thus was born a real-life mystery that has fueled speculation about who stole the treasure and how.

In Michael Kenneth Smith’s well-told historical novel, In the Shadow of Gold, the author explores how, after 150 years, the stolen money may have been the seed that grew into a fortune for billionaire Jonas Arvin. He becomes obsessed with finding out; if so, he might have to surrender his fortune to more legitimate claimants.

While this subplot begins and ends the book, with a few appearances throughout the tale, the bulk of the novel takes place during the Civil War era and posits an intriguing possibility: that one of the Confederate Naval Academy midshipmen, Yancey Arvindale, who was assigned to guard the treasure, somehow managed to spirit away the riches. This secret is revealed in well-described scenes (although some might question Arvindale’s ability to carry away several kegs of heavy gold coins with guards posted every few yards around the stopped train).

Smoothly integrated into the yarn is a forbidden love story between Arvindale and Ellie, a strong-minded, escaped slave. An enlightening depiction is woven throughout of the plight of newly freed slaves who are ill-equipped to cope with the challenges of liberty.

Readers will easily navigate this multi-generational story to arrive at a surprising ending. While not particularly artful or elegant, the prose gets the job done, simply and plainly. The characters are well developed, although Yancey’s rapid transformation from a ne’er-do-well and a sneak into a compassionate and generous man is a bit dubious.

Overall, Smith delivers an intriguing story and valuable contribution to our understanding of the period immediately following the Civil War, which profoundly impacted the country we have become today.