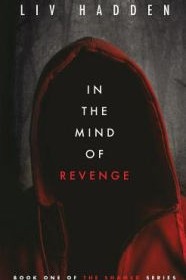 In Liv Hadden’s future-set debut novel, In the Mind of Revenge (volume one of “The Shamed”), a gender-indeterminate protagonist recovers from a vicious attack and wreaks vengeance on the aggressors.

The androgynous narrator, simply called “Shame,” was bullied throughout childhood and later the victim of a brutal beating and gang rape. Shame wakes up in the hospital over a year later, in 2028, having undergone 38 experimental surgeries that created a grotesque yet superhuman, bionic body—“ten shades of hideous.”  Upon release, Shame seeks revenge on the attackers and anyone else who stands in the way, earning the nickname “the Texas Torturer.”

The first six chapters are graphic and bleak, with Shame cutting out tongues and tattoos and killing someone with a butter knife. Soon, the book shifts from serial killer thriller to quest narrative as Shame goes on the lam, hotwiring cars and driving nearly 1,500 miles to Baltimore to find best friend Cassie.

In Baltimore, Shame meets an enjoyable cast of supporting characters, including Shadow, a tattoo artist, and “Juice Box,” whose family runs a Chinese restaurant. Repeatedly,  strangers give Shame refuge, even though it puts them in danger. While the series of threats against Shame and the character’s narrow escapes grows repetitive—it seems there’s always someone after Shame— it’s intriguing to see into the mind of a killer. Shame’s wild shifts in tone between bravado and self-loathing, along with remorse for some killings but not for others, raise the interesting possibility of this character being schizophrenic — a possibility that is left hanging. Whatever the cause of his state of mind, the unreliable narrator earns readers’ compassion for past suffering and ongoing identity confusion.

Those who recoil from graphic violence may want to avoid this title. Others will find an absorbing crime story that, perhaps chiefly, is a plea for tolerance of sexual otherness; as Shame asks, “does whether we sit or stand to relieve ourselves bear on our deeds as humans?”