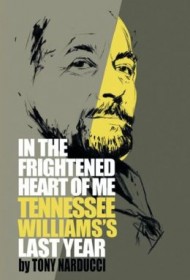 Tony Narducci had idolized Tennessee Williams for two decades when they met at a gay Key West disco in February 1982. Narducci offered his arm after having seen Williams stumble on the stairs. That simple act — the playwright stumbling, the young man propping him up — became the template for a complex and challenging friendship that lasted until Williams’s death almost exactly a year later.

Narducci was 34 to Williams’s 71, too young to put aside his own dreams and become Williams’s live-in companion as the writer exhorts him to do. Instead, the two travel and spend time together, in Narducci’s hometown of Chicago as well as Boston, New York and Key West.

Narducci’s poignant, well-written memoir (the title taken from Williams’s The Night of the Iguana), is based on his journal from that time, along with letters the two men exchanged. His description of a show staged by Williams and Vanessa Redgrave (in which Williams reads an essay with a loose denture bridge garbling some of his words) enlivens the narrative, as do cameo appearances by Mike Wallace and Andy Warhol, among others.

Narducci portrays his literary hero as alternately needy and lascivious, gracious and demanding; a pill-popping, wine-guzzling, emotional wreck prone to tears over his fear of dying loveless and alone. It’s a sympathetic portrait of a highly complex man, a man the author describes as an amalgam of Williams’s own fictional characters: “He was always protean: wise like Big Daddy, fragile like Laura, gentile like Blanche, persistent like Maggie, and fickle like Alexandra.”

Along with the last year of Williams’s life, Narducci’s memoir paints an indelible portrait of gay life on the brink of the AIDS epidemic, before the emerging “gay plague” is linked to unprotected sex. His bittersweet memoir is sure to captivate readers with an interest in Williams or in gay life on either side of the Great Divide that was AIDS.