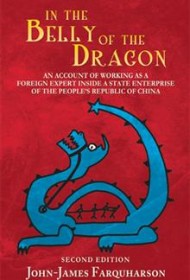 John-James Farquharson is the son of a British diplomat and has worked in various capacities in the chemical industry for 30 years. In 2010, he was hired to manage the Human Resources department at a 150,000-person state-owned enterprise (SOE) in China, one of several hundred foreign experts who have been contracted in recent years to modernize the SOE’s. His book recounts his experiences in this position.

As told by the author, this is a daunting task. The SOE’s are often poorly run, an inefficient mix of party politics, cronyism and corruption. China’s best and brightest join foreign multinationals; the SOE’s are left with young, underpaid and often-exploited workers and, perhaps worse, a corporate culture that resists change.

In concise, smartly written segments, Farquharson explains problems unique to the SOE’s: Companies can hide workers off the books to improve perceived productivity, for example, and there’s a reluctance to hire qualified executives because they don’t “look” Chinese enough. He also describes how he tried to solve these problems. Even Beijing’s pollution is a challenge, but one the author overcame (“The dust on my desk was actually sometimes quite useful. You could scrawl phone numbers down during a conversation . . .”).

Although the tone of the book is generally businesslike, the author writes with a light touch and often sees the humor in difficult situations. Farquharson sometimes drifts into business/management jargon that may slow down casual readers. Discussing metrics, he writes: “Those of you familiar with EVA will know the whole thing revolves around the weighted average cost of capital (nicely known as WACC) . . .”  Readers unfamiliar with EVA will need to do a little research.

In the Belly of the Dragon relates a story seldom told by Western media. It is a must-read for anyone considering doing business in China, and would interest business students and Sinophiles as well because of the author’s behind-the-scenes experiences.