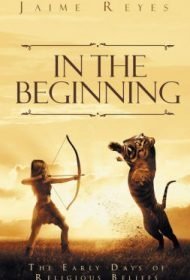 Jaime Reyes introduces his book with this quote from Voltaire: “If God did not exist, it would be necessary to invent him.” And that’s the theme Reyes tackles with In the Beginning: The Early Days of Religious Beliefs, a fictional journey 65,000 years in the past, which interprets his research of the genesis of organized religion and its effects on global history.

In an unspecified village, during a thunderstorm, elder statesman Og is cold, wet and clever enough to know that if he can convince the chieftain he has a direct line to the spirits, he can harness an almighty power. Thus, by inventing spiritual reasons for any occurrence, Og and his family essentially become the tribe’s shadow government.

Readers follow this tribe and Og’s manipulations through the years. The narrative tracks the annexation of nearby villages, the advancement of weaponry, including the bow and arrow and javelin thrower, as well as the migration of peoples.

The novel’s plot is not overly challenging and its characters are unsurprising. Its view of organized religion and the knowing wink that the unwitting can be easily manipulated by those crafty enough to invent an invisible higher power is cynical at its heart. The book, however, doesn’t explicitly ask readers to accept this as fact, and it is not meant to be an historical account.

Reyes’ research led him to follow a simplistic character-naming paradigm, and readers might have difficulty keeping straight Kor, Tor, Nia, and Sia (to name a few). Additionally, continuity errors lead to occasional stumbles. For example, one character indicates the amount “ten” by holding up ten fingers, then one page later a character uses the word “two” in a sentence.

The book’s premise is intriguing, and the story offers some rewards. It isn’t likely, however to satisfy those who prefer more robust character and plot development, and its minor missteps may cause some frustration.