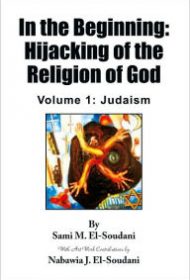 At the heart of In the Beginning: Hijacking of the Religion of God, is the question: Which is worse, mechanical failure, as when an engine breaks down under pressure, or human failure, when people buckle under social pressures and turn away from truth? For Dr. Sami M. El-Soudani, an aerospace materials scientist who spent 30 years in fracture mechanics, the answer is quite simply the human kind—especially those “religious zealots, power-hungry secular leaders, or monarchs aiming at mobilizing the masses to their benefit.”

In Volume 1 of a prodigious three-volume work (over 1,000 pages combined) that looks critically at Judaism, Christianity and Islam, the author explores how the Jews of biblical history made two crucial mistakes in their actions and beliefs that continue to have repercussions today.

El-Soudani contends that the first way Judaism was hijacked occurred when the Hebrews first worshipped a golden calf during the time of Moses. Essentially, a people’s lack of faith in the one-true God led to pagan worship, straining their relationship with the Almighty. The second hijacking occurred after “the first destruction of the Jewish Temple,” leading to the exile of the Jewish people. Over time, God’s desire that the Jews find a “Land of Promise” was, El-Soudani argues, corrupted by religious leaders to mean a “Promised Land.” This the author believes led to feelings of entitlement, giving rise to Zionism, which El-Soudani asserts is not a religious, but a “secular” movement in contention with God’s will, one that undermines “peace [in] both the Middle East and the world at large.”

El-Soundani’s theological knowledge is apparent (he says he spent over 20 years doing research that led to this project), but several factors hamper this book. The prose requires serious copyediting to correct numerous misplaced commas and awkward phrasing. And with it’s long, sometimes dense paragraphs that jump from idea to idea, this text can be a challenging read. Readers will also need a solid understanding of Judeo-Christian-Islamic history and theology to fully grasp the arguments being made here. Still, while many are likely to strongly disagree with the author’s ideas on Israel and Judaism, the book offers food for thought worthy of discussion.