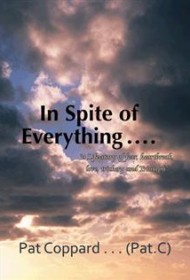 Pat Coppard’s memoir opens with the frightening German bombing raids on London during World War II, when Paddy (as he was called) was a young boy. Coppard describes in detail his family’s distress as they variously hide out in underground shelters or temporarily evacuate to safer housing in the countryside when the family home is destroyed.

Paddy’s Mum is seriously injured and dies early on. Meanwhile, his Dad is off fighting the war, so Paddy and his two brothers are raised by their loving grandparents. The account is sometimes tragic, discussing times of severe rationing and family members ravaged by death and disease. But the memoir also describes more youthful experiences: playing cricket, making bows and arrows, and engaging in bloody fist fights when challenged. There are sprinklings of humor as well, such as Paddy’s struggle to capture the surly family cat from the family’s bombed-out house by stuffing the enraged, clawing feline into a coal sack.

The memoir ends as Paddy, now a young man, is called up by the British army for National Service. Coppard promises a second book to complete his life adventures.

On the plus side, this jaunty, vivid tale comes alive because Coppard injects it with animated dialogue. He writes as people talked, but thoughtfully adds two pages of word and phrase translation. For example, a “burk” is a “fool,” “Rosie” is “tea,” and to do “a runner” is to “go away without permission.” An example of the author’s realistic touch: “Silly cow, I didn’t give a tinker’s cuss, she was a bit of a whinger anyway.”

The book contains few specific dates, which would have been helpful in following the story. However, the writing offers insight into that time period and sings with authenticity. While the memoir is clearly written for family members, Coppard’s keen eye for detail likely would please most history buffs as well.