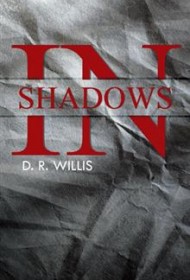 A mystery suspense that opens in 1946, In Shadows spins its story within the fabric of a post-WWII America that’s attempting to regain its equilibrium in the strange new era of peace.

The plot revolves around small-town, good-hearted protagonist Nelson who rushes to the aid of his older, troubled brother who believes his life is in danger. Nelson soon gets drawn into a world of subterfuge and is aided by a young, beautiful cub reporter who is as naïve as Nelson about how to find answers. Meanwhile other subplots percolate: a woman hires a detective to follow her fiancé, and a mysterious traveler voyages into the jungles of Thailand to wrest a package from a Japanese general. Akin to a Tom Wolfe novel, the limited light that’s fixed on smaller scenarios seems to promise that it will ultimately fuse into a fully illuminated whole.

At a mere 125 pages, the pacing is terrific, with characters depicted with admirable specificity. While male writers often have difficulty portraying women, Willis delivers not one, but two distinct females with unique personalities. Additionally, he knows how to set a scene by sketching in the few judicious details that convey just enough.

Plot twists are plentiful and will probably surprise the most jaded of readers, but unfortunately, the story never coheres the way readers might expect. Plot holes abound: Characters’ actions are at times illogical; off-stage events are fuzzy, forcing readers to guess at what might have occurred; and, most frustrating, the author never reveals the “secret” of the secret corporation that lies at the center of the plot. It’s as if portions from earlier drafts got lost in a capricious cut and paste.

A savvy editor could have rectified these issues. As it stands, In Shadows is likely to entertain and frustrate its audience in equal measure.