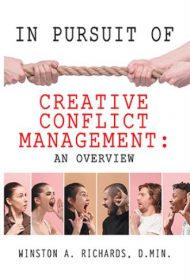 In this academically oriented book, retired Seventh Day Adventist Minister Winston A. Richards offers a methodology to teach aspiring and practicing pastors how to deal with the many complex aspects of conflict encountered in the church environment.

Richards recognizes there’s a vast difference between learning to be a preacher through lectures and practice preaching and actually doing the job, which often involves conflict, ranging from disagreement about what hymns to sing and ways to finance a new tabernacle to interpersonal strains.

There are two crucial levels of potential reconciliation, he notes: “vertical” (reconciling one’s conflicts with God and religious practice); and “horizontal” (reconciling them within oneself and with one’s trespassers). The Bible, he adds, is the first source of understanding and potential solutions, offering examples of how biblical personalities managed their differences and how Jesus dealt with the nearly constant conflict that confronted him.

Richards also discusses the role of restitution in conciliation, secular literature’s stance on conflict, and more, and includes the writings of Ellen G. White, Lewis Berkhof, Walter Brueggemann, among others. He also offers a lengthy questionnaire allowing readers to rate common conflictual concepts and situations, personal and church-based. The questionnaire, he believes, can be utilized in presenting seminars on conflict resolution, as can specific exercises he offers.

Richards shows scrupulous attention to detail. His accumulated knowledge is academically sound and reflects the specific views of West Indies and Caribbean Union ministers. He offers lengthy appendices with detailed data about the questionnaire and numerous references.

A minor drawback is that Richards refers to persons in general as “he”; too, he gives no specification of race or gender for his questionnaire’s respondents, only marital status and age. A more inclusive stance would attract a wider readership.

Nonetheless, Richards’s diligent examination of conflict resolution is well suited to aspiring and practicing pastors, as well as other groups and individuals seeking relief from the thorny trappings of inner or outer conflict.