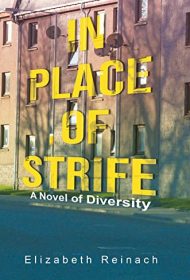 In this tale, a group of employees for a local U.K. government agency find themselves with a mystery on their hands as elections near and a murder occurs.

When the obese Mrs. Gordon takes a new job as secretary for the chief executive’s department within the city council, her size prompts giggles from two of the young staff members. Expecting she’ll lose the job, Mrs. Gordon begins to cry. Then, another staff member, Len, speaks up about his past and how he also feared losing his job. The conversation creates a quick bond between the team members, and Mrs. Gordon, soon identified as Arlene, stays with the team.

But it’s not long before she makes a serious mistake after being conned by “Sandra,” who lies about her own identity and alters papers Arlene is typing. Sandra’s behavior strikes the first note in a mystery that plays out through the story.

As the team members go about their duties, generally visiting various government programs, they are prompted to consider how the upcoming election may impact the programs and their jobs. Then a man is found dead on the street, political rallies heat up and the criminal wrongdoings of important people are revealed.

The story’s characters are everyday people that most readers will recognize. They’re easy to cheer for as they work to get ahead, even as they struggle with personal problems, from eating disorders to criminal histories.

However, the story’s technical issues greatly impede enjoyment. Grammar errors abound, including missing commas, periods, incorrect use of question marks, missing words and misspellings (“She didn’t even have the presents [sic] of mind to wisper [sic] words …”). Awkwardly worded sentences can be hard to decode: “He had to keep business going in an orderly way, the children in care must not suffer, the rubbish must be collect, people find homes and so on.”

While the story has potential, it requires thorough editing to hold an audience’s attention.