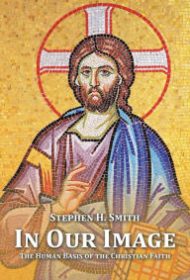 “We are made in God’s image.” These words are a basic tenet of the Judeo-Christian tradition. But what do they really mean? Does God look and act like you and me, with human features and foibles? Or does this idea have a more significant meaning that has been lost over the years? These questions are at the heart of Stephen H. Smiths’s intelligent and thought-provoking work, In Our Image.

Here, the former teacher challenges not only biblical fundamentalists, but theologically liberal believers to see beyond their narrow visions of creation and acknowledge that most of what we think about when we think about God is little more than human projections.

Smith isn’t arguing that God doesn’t exist, but he does take Christianity and the Church to task. His arguments are sound, exposing illogical holes in millennia-old teachings on such topics as suffering, justice, and heaven and hell. Returning to his recurring theme, he contests that these notions are often clothed in a mantle of human neuroses, which ultimately leads the faithful in the wrong spiritual direction, yielding a superficial understanding of the nature of God. For Smith, believers need to look at religion through the lens of allegory and symbol, which he argues allows for better opportunities for more mature understanding of God.

So where does that leave readers who may have grown up with the ideas Smith is criticizing? Possibly feeling undermined, but as the author notes, it’s only “when we allow God to be himself will his image in us be clearly reflected.”

Smith is an attentive writer. His lines are clean and he has a great gift for taking complex ideas and making them easy to understand. While conservative readers may have a few bones to pick with his viewpoints, he nonetheless offers a well-written, provocative, and scholarly, yet accessible, look at what it means to be in true relationship with God.