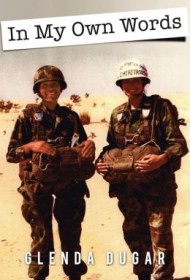 Glenda Dugar broke new ground by becoming the first female African-American airborne MP in her Army unit. Her memoir, In My Own Words, centers on her military career, with glimpses of childhood and life after the service as bookends. Unfortunately, even her best anecdotes are sometimes sadly undermined by writing that needs polish and organization.

Dugar’s early childhood in a Chicago housing project gets little discussion, and her memories of John Kennedy’s and Martin Luther King’s deaths lead to a bizarre rumination on the popular ads and TV shows of the day. Accounts of her military service, from 1978 through Operation Desert Storm, are somewhat more focused – her first jump from a plane is vivid and exciting – but even these often lack a clear narrative for readers to follow.

This passage is typical of the book’s style: “I had never seen original castles before (other than Disneyland’s), and the knowledge of the age of these dwellings makes you realize just how old of a European country Germany is.” A reader can get the gist of the author’s intent, but not without effort.

Dugar spent time in Germany as an air traffic controller, but the timing of her travels is confusing. She has a son, and then gives birth to a daughter, yet no mention is ever made of a father or where her infant son was while she traveled for work. Quotation marks are sometimes used to isolate spoken comments and sometimes used for emphasis; the inconsistency makes the going rough at times.

Dugar has a story worth telling, and the photos reproduced within In My Own Words make it a book that her friends and family will love, but it needs significant revision to connect with general-interest readers.