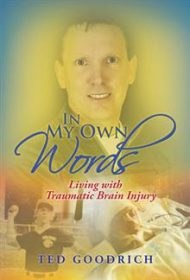 In 2013, Ted Goodrich published Ten Seconds, a small but cathartic memoir about his traumatic brain injury (TBI) and acute recovery some 20 years before. In this follow-up version, which offers rewritten information from the first book, he adds his experiences as a single father living with an acquired, lifelong disability.

Unlike some triumph-over-tragedy stories that leave readers wondering what the person was like before the illness or injury, In My Own Words: Living with Traumatic Brain Injury does a commendable job of setting the stage with Goodrich’s life as a young baseball player and insurance agent, a person with a competitive spirit and strong will to succeed. The glimpse into his previous lifestyle and fast-track future makes his frustration even more believable as he later struggles in therapy sessions to name different colors and catch a beach ball.

In My Own Words also brings to life some deeply personal fears about leaving the now-familiar hospital for “home,” being around other people, and, eventually, re-entering the workforce. In one early scene, as he lies in a coma, he is horrifically aware that his parents and doctors are deciding his fate while he screams in vain, at least in his mind, to get their attention.

From the first page, it’s clear that In My Own Words is not professionally written or polished. But Goodrich’s accessibility—it’s as if he’s telling his story to someone sitting next to him—along with his straightforward writing style, most often works in his favor.

Readers seeking inspiration will not be disappointed, and TBI patients and their families will feel validated by the author’s detailed medical references. At its core, though, In My Own Words is a love story—to Goodrich’s devoted parents, to his daughters, to the sensitive friends who took the time to get to know him all over again and, instead of asking, “Do you remember me?” simply gave him their unconditional love.