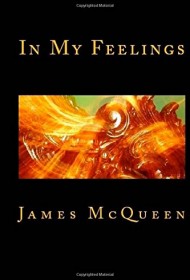 The poems in In My Feelings seek to document the emotional life and personal struggles of their speaker. As the author informs us on the back-cover blurb, “I wrote this book to let you ride along with me In My Feelings.” Some poems also directly address people from the speaker’s past, and a few offer advice to readers.

James McQueen’s poetry, while clearly rooted in strong personal emotions, is raw and uncrafted. For instance, in “Sick and Tired,” the speaker begins, “Fuck me/naw/fuck you/and this tha last time/ I say that shit/…” In “Worth,” the speaker rants, “Girl you ain’t worth a booger!/…Swearin’ I’m the master of deception,/ knowin you were the mistress of manipulation!” Many poems mention the speaker’s relationship with Jesus, but it is hard for readers to draw spiritual inspiration from references to Christian faith when they are juxtaposed with such strident language; the aggressive tone and profane diction of these poems overall will be alienating to many readers.

This gritty, street-wise approach can be effective in conveying the rawness of human experience. In this case, though, McQueen’s poems lack imagery and rely on telling vs. showing and condemning language vs. specific details that would help readers connect to this world. For instance, “Damn Kids” simply states outright: “Kids are truly selfish,/ hard headed,/ know everything except the right thing./ And I wonder what they would do if I was/ not to give a fuck!” The poems also lack reflective insight, as in “Figure Me Out,” where the speaker flatly declares, “Shit thats [sic] just me./ So until Jesus transforms me into a better me./ Man I’m just gone be chillin.”

In sum, the collection requires revision, with greater attention to language, image and ethos, in order to reach poetry readers.