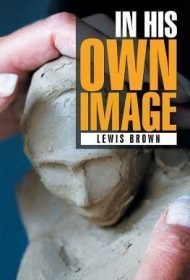 Lewis Brown’s novel In His Own Image tells the story of a baby boomer teaching at a small Georgia college. The man’s rift with his religious upbringing makes an impression on his star student, who shares his conservative Christian background.

The story is recounted by a narrator living in the nursing home with Stan Ogleman, who suffers from Alzheimer’s Disease. It unfolds around Stan’s fractured memory of a portentous funeral, itself the culmination of an ill-fated love affair between Stan’s former student, a Christian-raised Southerner, and a Muslim-raised Arab woman, who work together at CNN just before 9-11.

As the plot unfolds, it offers the slow burning revelation of how Stan became disillusioned with his childhood faith, and highlights the conflict between inherited cultural assumptions and the drive to question their validity.

The consequences of the romance are heart wrenching, providing the emotional backbone of an otherwise intellectual story; the narrator spends less time creating dramatic scenes than painting the broad strokes of characters’ backgrounds and experiences. There’s virtually no dialogue, and Brown rarely offers descriptions. Instead, the novel consists of events related to the narrator, who then provides scholarly contexts of culture and history. For example, while portraying Stan’s awkward childhood milieu and awakening to prejudice, the narrator interweaves the backdrop of the Civil Rights movement, the Vietnam war, and the rising forces of counterculture.

Effectively, Brown violates the age-old writing advice of “show don’t tell,” but with impressive results. The story feels more like a biography than novel, lending it credibility, intimacy, and immediacy.

The narrative’s chief problem is that the main story involving Stan’s crisis of faith continues even after the lovers’ story ends—with diminishing returns. While Stan’s subsequent epiphanies about religion are interesting, they can’t quite compare to the lovers’ plight.

Nonetheless, the overall novel remains a provocative, surprisingly emotional journey that will appeal to anyone interested in the role culture plays in shaping the most basic aspects of our being.