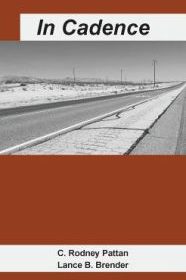 In Cadence is an annotated collection of verse written by two Army officers who blend poetry and patriotism to honor memorable individuals, emotions, and events in their lives.

While many of C. Rodney Pattan’s and Lance B. Brender’s life experiences are clearly rooted in the military, their combined work covers a broad range of subjects, from relationships to pets, mentors, and even a broken cuckoo clock incident. Poems like the poignant “Boots” and “They Also Serve (A Soldier’s Wife)” embody the classic challenges that occur with deployment. By contrast, “Sad Little Egg” is a humorous ode to the fate of a character that often ends up boiled, deviled, or fried.

The collection is often highlighted by heartfelt, family-oriented poems that frequently suggest a deeper complexity beneath simple exteriors. Brender’s “House of Peace,” for example, reveals his grandmother’s home as a place of solace:  “outside the walls/ the locals change the old train town/ to the demands of modern truths// but inside the world stays/ serenely still in the house with/ its shutters long blown loose.”

Both poets write primarily in rhyme. Each work is prefaced with an explanation of the piece’s origin. Often different rhyming patterns are used within the same work—e.g., one piece opens and closes with alternating lines of rhyme, while the middle verses follow a first and second /third and fourth rhyming pattern. This can be jarring, as can rhymes that seem forced, such as: “Can’t we recognize the gifts to us they are/ The flashing brilliance of the brightest star.” The poems would also be improved with stronger imagery and less abstract thought (“As data then multiplies/And worries bring palsy to the hand…”).

While the wide range of topics here may be distracting to those looking for singular coherency, the varied ideas of two men called to military service are inherently interesting. Despite the flaws mentioned, readers will find some rewards in this collection of simple, eclectic ponderings.