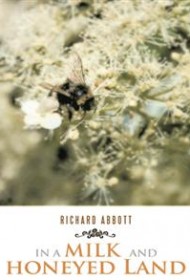 Set 3,000 years ago in ancient Canaan, In a Milk and Honeyed Land tells the story of a young priest, Damariel, and his small village tribe, as they learn life’s lessons of love, loss, sacrifice, and growth. The story follows Damariel from boyhood to adulthood, as he is trained for and then becomes the village seer, taking him through romantic relationships and travels to nearby cities filled with the cultural diversity of the era. A narrative of everyday life as it might have been for early settlers in what is now Israel and Palestine, the story seamlessly mixes history with fiction.

Like The Red Tent, this book aims to complete a missing story in the Hebrew Bible, that of the very beginnings of Israeli settlement. With a Ph.D in Old Testament and Egyptian poetry, the author is an authority on the subject, and it shows through the captivating descriptions of the ancient rituals, songs, village life, and even a battle scene. A confusing introduction of the villagers, their professions, and their connections at the start of the book slows the plot in a way that keeps it from taking root at first. However, as Damariel grows and the characters become familiar, the story grabs hold of the imagination. Despite a sluggish beginning, In a Milk and Honeyed Land eventually satisfies as a love story, coming-of-age tale, and historical narrative.

Anyone unfamiliar with ancient Middle Eastern history should read the postscript before starting the book, as it includes a brief history of the time period and the common names for the ancient terms used in the book, which are helpful to a reader’s understanding and enjoyment of the book.

This novel is likely to appeal to those interested in historical fiction, especially Middle Eastern and Biblical history.