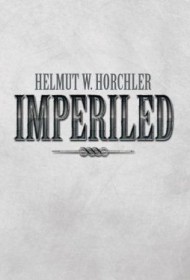 Intriguing ideas can get a story started, but sustaining reader interest for the full length of a novel is a challenge for any author. In his second novel, Imperiled, Helmut W. Horchler enjoys mixed success, getting things going with fascinating questions about the hidden criminal past of an apparently upstanding citizen, but frequently stalling on the way to an ultimately underwhelming resolution.

Imperiled follows up on Horchler’s earlier novel, Shad’s Awakening, by fast forwarding from Shad’s troubled young life to his twilight years. Just as he’s finally settling down and feeling satisfied with his life, Shad’s past comes back to haunt him when a detective digs up some dirt. It seems Shad Cooper is not, in fact, Shad Cooper at all. This should be earth-shattering news, but as it is written here it’s not. Shad explains the whole sordid tale to his fiancée Ruth in the early pages, leaving little for us to ponder.

Instead, we accompany Shad on the quest to clear his name, which covers a lot of legal ground and is delivered in awkward, formal language. Horchler attempts to add texture to the story with exotic locales—Thailand, Hawaii, China—but their descriptions read more like Wikipedia entries than personal observations by the characters. The most entertaining tangents involve Ruth’s colorful friends, coworkers and clients; dialogue among the women is natural and brings much-needed humor to the table.

While the idea behind Imperiled—that a seemingly ordered life might be built on tragedy, crime, and lies—has promise, Horchler would get more mileage from it if he developed Shad’s personality and world more fully before disrupting it with a blast from the past. As it is, we don’t see what his life is like before the revelations and accusations surface, which makes it hard to stay engaged as he works toward a resolution.