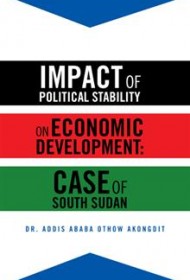 This title is actually two books in one. The first is a thoughtful case study of the history of the world’s newest nation; the second a critical interpretation of the role of political stability in a country’s economy.

Dr. Addis Ababa Othow Akongdit gracefully traces the political history of Sudan’s modern civil wars, wars that led to the southern provinces’ declaration of independence in 2011. He shows the ease with which South Sudan was welcomed into the United Nations and outlines the new nation’s unique constitutional commitment to the protection of basic human rights. Akongdit illustrates how oil all but controls South Sudan’s economy and how the embargo on oil shipments to the north is affecting the nation’s economic development.

The author demonstrates balance here, clearly presenting the problems of the country’s dilapidated educational system and widespread societal corruption, as well as the challenge presented by South Sudan’s one-party government, headed by Sudan People’s Liberation Movement. Ever hopeful, however, Akongdit predicts a long life for South Sudan, once it learns how to include the political opposition in its government and stabilize its economy.

However, this useful information is muddied by Akongdit’s theoretical exegesis woven into the narrative. In an attempt to defend an overarching academic thesis — that “political stability plays an important role in determining economic growth and economic development in many economies” — the author overloads readers with theoretical discussions, economic indicators, and statistical presentations. Unlike the historical information, this material is presented in a manner largely inaccessible to the average reader. This duality of style stems from the fact that this book is actually the author’s unedited doctoral dissertation. Had Akongdit chosen to revise his largely opaque theory (and edit for repetition and grammatical errors), this would have become a better book.

However, Case of South Sudan can be recommended for its cogent political history of this nation — at this writing, it appears to be one of the few such studies of South Sudan in print.