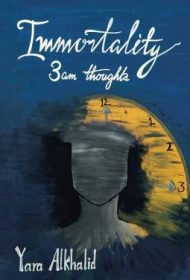 Lost love is explored in this collection of 40 rhymed poems by first-time author and Saudi Arabian medical student, Yara Alkhalid.

A note to readers explains the book’s purpose and its title. “I saw how people we’re [sic] interested in Shakespeare mostly love poetries even though he died. And I wanted to be immortal just like him.” Unfortunately, despite the poet’s admirable efforts to share his personal experiences, the book contains numerous examples of broken English, grammatical mistakes, capitalization and spelling errors, inattention to meter, and improper sentence structure that impede meaning and disrupt fluency.

The first two poems in this collection are titled “thank you mom” and “thank you dad,” which offer gratitude, if not clarity. From the latter poem: “You don’t have to be afraid to check a seer, / I’m here to make everything clear, / Because Without you, I’m weak, / And without your potentials in me, I leak.”

Other poems focus on pain and disappointment. For instance: “What if life was an illusion? / Our sorrows found a conclusion? / Kept Feelings has escaped the diffusion? / A dead soul has found a transfusion? / Broken hearts got healed; yes it was only a contusion?” This unconventional style of multiple end rhymes without a pattern gives the impression of rhyming for the sake of rhyming, rather than to deepen each poem’s meaning.

The book could be improved with comprehensive editing by a native English-speaker who understands language nuances and poetic form to improve lines such as “Be the immorality, / Not fragile clay”; “Like 70 years old who needs a clutch to stand”; and “In extraterrestrial space you’re the plant that I would land on.”

As written, this book, though well-intentioned, presents many obstacles to comprehension. As a result, it is most likely to appeal to friends and family members rather than poetry readers at large.