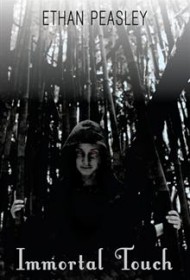 In this addition to the always-expanding vampire category, author Ethan Peasley’s narrator is not the romantic creature populating much of the genre. Instead, Asael was turned into a “dark parasite” during the Roman Empire. He has decided to write his memoir, which ends in the 21st century.

Soon after he becomes a vampire, Asael rankles under the yoke of the group leader, (the Biblical) Cain, who had been the first vampire. Asael and his closest companion, Mordecai, overthrow Cain, which disbands the coven, and they set out together. They are driven by very different needs: Mordecai suffers from his need to feed and desperately aims to help humans, while Asael primarily feels contempt for the “blood bags.”

Peasley creates intriguing lore about these perennially popular creatures, including how drinking blood is the only antidote to hearing the voices of the dead, ways in which new vampires are made, the relationships among vampires and with Satan. However, there is a lack of tension and conflict, as Asael’s powers make him nearly invincible, and the situations he finds himself in don’t fully develop or resolve.

For example, Mordecai and Asael are hired by Hitler – they were sent to him by Satan – and turn the Jews trapped in the concentration camp Sobibor into a hybrid form of vampires, which gives them the strength to form a successful uprising. But the reader never discovers what becomes of this new race of vampires, other than to learn that Hitler is furious and Satan is pleased. There are also elements of vampire life that are hard to understand because they seem to be inconsistently applied or explained after the fact.

Asael’s voice is appropriately elegant, and there are new twists on standard themes, but the lack of narrative drive make this a read for only the most devoted vampire fans.