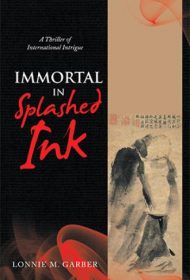 When divorce lawyer Aruba Jones is hired by Professor Jack Cedar’s wife to file a restraining order and stop him fleeing the country, Aruba gets the job done. But in this science-based thriller, nothing is as it seems.

Immortal in Splashed Ink is a dual narrative that moves between events taking place in Asia from 2014 to 2021 and present-day Long Island, New York. In Asia, Dr, Pao Den Chin, a respected Chinese scientist, gradually suspects that the ruling Communist Party is covering up environmental damage caused by the mining of rare earth minerals. It’s also possible that a new viral illness has been transmitted to humans from bats.

Meanwhile, in Long Island, Aruba Jones is shocked when Jack Cedar arrives at her office and angrily tells her he has no wife.

Aruba and Jack are engaging characters, and their sharp dialogue sparkles. Cedar is a respected professor of rare earth minerals at NYU, but how can Aruba trust him when the woman who claimed to be his wife was so convincing? Den Chin is another strong, well-rounded character, a man who has succeeded in the Chinese Communist Party despite his Taiwanese heritage.

Locations are well described, and the scientific underpinning to the plot is woven successfully into the story. Emerging links between Jack’s work and the parallel Asian storyline will have readers turning pages until all is revealed.

The dual structure Garber employs has it weaknesses. When Aruba and Jack discover the truth, readers have already learned everything from Den Chin’s storyline; this makes the ending anticlimactic and repetitive. Two minor characters pivotal in linking the storylines aren’t well fleshed out, and at points, the writing slows the pace; characters’ movements and thoughts are over-described, for example, and dialogue tags, adverbs and explanations are over-used.

Nonetheless, with likable central characters, solid description and plenty of action, this is an entertaining and timely story.