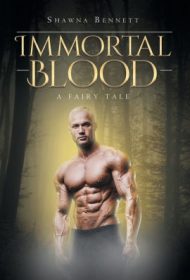 A follow up to Soul Song, Immortal Blood alternates in the present and past realms as Shawna Bennett’s fae-based tale explores magical worlds while debating the worthiness of a humanity dead set on operating under evil.

The book introduces Simon, son of the fae, who is days away from having his powers “sung in” during a ritual. Before this happens, however, Simon’s family encounters a strange mist that has souls trapped within it. Simon and his three siblings—twins Hannah and Harlow, and brother Paul—team up with their parents to understand the threat the mist brings before the souls trapped inside can consume them.

Things grow complicated for the family when Simon’s powers come to fruition. They discover he’s tasked with more than protecting the human world, as they all are, but to change it forever. In the awakening of Simon’s abilities, his responsibilities pull him away from his family and towards his newfound family of immortals. Simon must decide where his loyalties lie — and whether he’ll be able to make the ultimate sacrifice for the greater good.

As the story unfolds, the novel beautifully builds on the magical world. However, the info-dumping might prove overwhelming for readers. After the author introduces characters, she has those characters recount their own introductory stories in the form of a memory. In a section where Mother, the mother of the fae, tells the family about the Furies, her explanation goes on for a page and a half, followed by The Furies explaining their own story through shared memory. This “tell” rather than “show” approach proves cumbersome.

The story is also recounted from multiple points of view, and readers may have trouble trying to remember bits of information regarding each of these many characters.

Although Bennett pens a layered plot, there aren’t many action-oriented moments until the book nears its end, approximately 80-90% through. While the author wraps everything up nicely, the wait may prove difficult for even the most dedicated fantasy fan.