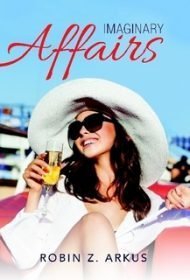 Divorced, widowed, and now living in London, Mallory Hill decides to celebrate her 50th birthday with a 10-day trip to Thailand. At Chiva Som Spa, she hopes to find inner harmony and re-evaluate her two-year relationship with her married lover, Michael. When she agrees to dinner with the boisterous Canadian guest, Brad Miller, sparks eventually fly, and soon Mallory is emailing her best friend back home that “she’s found Mr. Right.”

The story moves easily between the Far East, London, and a happy relocation to the glitz and glam of Cannes, France. Over the next few months, Mallory anxiously awaits long overdue phone calls and get-togethers promised by Brad, while hoping she hasn’t just imagined a real future together. Meanwhile, she interacts with an entertaining array of suitors, from a fix-up with Derek, aka “Boozy,” whose appearance she likens to one of Snow White’s dwarfs; to long-distance admirer Matteo, who leaves her with nothing but an extravagant restaurant bill; to a demanding widower she monikers “Mr. Mafioso.”

Such characters add to the intrigue and are a strength of the novel. Unfortunately, the story also has a few flaws. Mallory’s impulsive passions, foolish decisions, and choices to ignore the writing on the wall seem incongruous with her portrayal as a self-confident, well-heeled, well-traveled individual. This results in a lack of credibility for her character and causes readers to wonder if she really wants to “get off that merry-go-round” after all. The narrative also contains a handful of typos and/or grammatical errors throughout that require attention.

Imaginary Affairs seems geared toward a female audience drawn to a search for “Mr. Right.” Hopefully, readers will also see it as a cautionary tale about time and self-worth wasted on all the Mr. Wrongs.