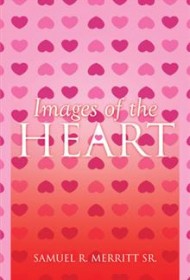 Images of the Heart by Samuel R. Merritt Sr. is a slender book of 25 mostly-rhyming poems, each with a clip-art or stock-photo image facing it on the left-hand page.

Most of the poems are uplifting and sweet, such as “Friendship!” which refers to the loyalty of the speaker’s friend: “With all my hang-ups, and my ups and downs, / Even when my back was against the wall; / When no one else would help me, / You were there with me, through it all.” Like most of the poems, it follows an ABAB rhyme scheme.

Despite the sympathetic approach of the pieces here, Merritt’s use of overly familiar metaphors to describe character flaws and struggles leaves readers wanting more. Someone who shares that he is “the youngest of sixteen children,” surely has more vivid specifics to work with, whether wholly autobiographical or not.

Even a poem comparing the speaker’s wife to Adam’s rib fails to describe any qualities of the addressee, leaving readers wondering about the more precise nature of the marital relationship. Titled “My Rib, My Wife,” this poem limits its discussion of the speaker’s search for a wife to very broad terms: “I searched, and chased, and run [sic] around / Until that special one I had found. / Not one to cling on my neck as a bib, / Someone,at my side, as my rib.” While the “bib” simile is original, it has a somewhat unintentional comic effect; the speaker’s beloved may share the qualities of physical closeness, like a bib on a person, but the poet probably doesn’t want readers thinking of the wife as a thing that catches food.

The images that accompany the poems, while they may enhance the work for some readers, lack any stylistic cohesion, which can be distracting.

In total, while this collection truly showcases the seemingly positive, loving personality of the author, the poems are not original enough to appeal to a wide audience.