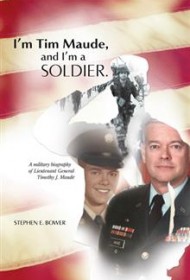 Few of the victims of 9/11 were famous. But one of them was a three-star general: Timothy J. Maude, who shared the distinction of being the highest-ranking American soldier to lose his life in action. Still, Maude’s story had not received the telling it deserved. Author Stephen Bower has remedied that.

Maude’s life ended on Sept. 11, 2001 when he was among 125 people killed as a hijacked jet crashed into the Pentagon. At the time, he was the Army’s deputy chief of staff for personnel. He left behind a veritable army of former colleagues whose affection and respect he had earned. One of them was Bower, a staff historian for the U.S. Army, who began researching this book in 2004.

Maude’s 35-year military career took him and his wife, Teri, around the world: to West Germany, South Korea, California, Indiana and Washington, D.C. He was a member of the Army’s Adjutant General’s Corps, which is responsible for, as the author puts it, “the human dimension of soldiering,” such as health care, mail delivery and family issues. During his service, Maude rose through the ranks by taking assignments that weren’t glamorous, and his skill at identifying problems and correcting them won him respect and praise, not just from his superiors, but from the average soldier, whose life was improved.

Bower is a skilled writer. By necessity the book is heavy on military terms and explanations of the structure, practicalities and politics of the military. Yet he never goes too “inside baseball” to bog readers down, and he presents personal details that bring the general to life.

Maude lived, and died, in an extraordinary era in U.S. military history, from Vietnam to 9/11, from the fighting in Southeast Asia to the post-Vietnam reinvention of the military to the dawn of the war on terror. His story should be of interest not just to military buffs but to anyone curious about the times.