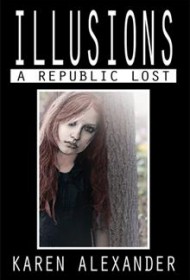 In her Author’s Notes at the beginning of this book, Karen Alexander reveals how her first novel came about: “Illusions was inspired by the fear and foreboding I have felt under the current administration…I am afraid that we are heading toward a social democracy…that the United Nations will become our legislator and our army, and with that a one-world religion that ignores the principles of faith on which our country was established.”

Thus, Alexander creates a frightening and, sometimes, believable future centered around a Southern, small-town woman named Jessie Martin and her family’s struggles after a Middle Eastern consortium called the Eastern Union destroys most major American cities with bombs and missiles and takes over the U.S.

To save her family, Jessie is forced into marriage with a high-ranking Eastern Union member, and, while trying to blend in, she begins her work disrupting the new government as part of an underground militia. Despite severe trials, including torture and injury, Jessie bounces back as she joins with members of her family, Navy Seals and Special Forces soldiers to thwart the new order.

Although Alexander successfully paints a desolate picture of a possible future, some structural and plot problems hinder the story. The narrative is obviously told from Jessie’s point of view, yet it shifts from first person to third without warning, and past and present tenses are used interchangeably.  Alexander could have gotten her point across more subtly (and effectively) without frequent references to the NRA and Second Amendment. Finally, the book is too short. The events leading up to the take-over are glossed over, lacking the detail to make so quick a change credible, and the story ends abruptly.

Alexander clearly has the talent for characterization and description to expand this work and make it stand with more memorable works of dystopian fiction.  As is, Illusions is more of a promising first draft than finished product. One wonders what the final revision might look like.