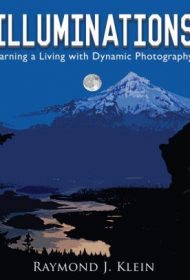 In this memoir, Raymond J. Klein not only recalls his life and career, but tries to impart his wisdom and inspire others interested in photography.

When Klein was 12, he found his father’s old Kodak camera, and his career path was set. Within two years, he’d become the family photographer, learned to develop his own prints, won a $10 prize in a newspaper contest for his shot of the family cat stalking his mother’s caged canary, and went to work in a Kodak processing plant.

He later spent four years in a U.S. Air Force photo unit, worked for RCA photographing missile launches at Cape Canaveral, and landed jobs with studios in Chicago, where he shot editorial and advertising photos.

Illuminations consists of 29 short chapters, most explaining how Klein took some of his best shots, with the accompanying photos. As Klein’s career evolved, he became more involved in multiple exposures and different lighting techniques, and he provides examples of these as well. He later teamed up with several poets, who wrote poems inspired by his images.

The photos help overcome a narrative slowed by punctuation and typographical issues. The author emphasizes certain words and phrases by bold-facing them; that, combined with random capitalization and quote marks, and a plethora of commas, makes for a choppy read, as in: “The text writer person, I had been working with, at the Martin Company, at that time, recommended I apply at an Advertising Agency or a Studio, producing Photography.”

That aside, Illuminations provides some valuable lessons and inspiration for those with an interest in photography. While, the work of photographers has been changed drastically by new technology, the lessons Klein imparts are timeless.