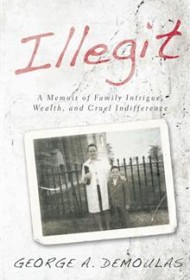 George DeMoulas’ greatest accomplishment in life might be right on the cover of his book: his name. Illegit is DeMoulas’ story of his life and a years-long court battle to gain recognition as the son of a prominent Massachusetts businessman – and with that recognition, the ability to change his name on his birth certificate.

DeMoulas was born to Dorothy Bedard and John DeMoulas in 1961, one of five children. Dorothy and her children were DeMoulas’ second family, a fact kept hidden from the public. While DeMoulas’ family made a fortune in the grocery business, his second family lived in poverty, surviving on welfare and the few crumbs his family members threw their way.

The secrets and suffering left their mark. The author quit school at 15 and became involved in petty crime, dependent on drugs and alcohol. He went through rehab in 1988, determined to be acknowledged as DeMoulas’ son, and in so doing alleviate any shame his mother had about the relationship. “The desire for justice had helped me get clean and sober and stay that way even when things got tough for me in business and in my personal life,” he writes.

The DeMoulas family tried to buy him off during the course of his courtroom battle, but he rejected their overtures. (He insists that he didn’t pursue the case for money.) In the end, the courts ruled in his favor. He obtained a DNA sample from his father’s body after the elder man’s death, and paternity was established. George Bedard became George DeMoulas, his battle won.

Readers will come away from Illegit with respect and admiration for DeMoulas. Still clean and sober, he now owns an interior design business. He also earns kudos for his writing. The book is only 99 pages. That sounds sparse, but he tells his story in a straightforward and interesting manner that will appeal to not only his siblings, but anyone who enjoys seeing David whip Goliath.