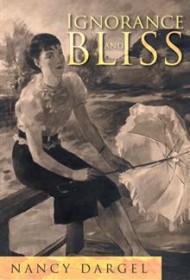 Nancy Dargel’s memoir Ignorance and Bliss is an engrossing work, steeped in geographical, social and political detail, that calls to mind 19th century romantic fiction. Sprinkled with photographs of Dargel at various stages of her life, the tale begins in 1915 when she is 3. During World War I, while her father fights at the front and her mother volunteers for the Red Cross, she lives in the English countryside with her grandmother. When her father is wounded, he returns home and the wee girl takes charge of his convalescence. Meanwhile, her emotionally fragile father, estranged from the rest of the family, finances her education through parochial school, Oxford and the Sorbonne.

After her schooling, her father forsakes her, too, freeing her to pursue romance and career. Her passion for theater leads to her meeting “The Director,” with whom she has a 12-year affair until his death late in World War II. She later has a daughter with a man she doesn’t marry and works as an interpreter across Europe. In 1960, she begins working for the United Nations, participating in diplomatic negotiations from Africa to the Soviet Union to Stockholm. Over the next 25 years, she witnesses history being made, including that of Ethiopia during the 1960 attempted coup against Emperor Haile Selassie; Prague during the 1968 Soviet invasion; and Helsinki in the final stages of the peace agreement.

Dargel, who died in 2006, writes beautifully, drawing the reader in with vivid descriptions (calling her child’s point of view “inevitably earth-bound,” for example), and intelligent commentary on personal and world affairs. Near the book’s end, she gives her perspective on human history, cautioning that, as people squander natural resources and pursue technology, they must not lose sight of “factors not included in computer programs — the returning seasons, sunshine and rain, (and) unknown imponderables like the movements of the human heart.”