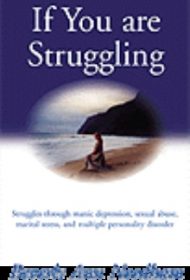 In If You Are Struggling, Beverly Ann Needham shares her fierce battles with mental illness.

Needham was diagnosed with clinical depression in 1986, six years before she had the last of her seven children. She writes of the “pain in my soul [which] pressed heavily on my mind.” After one sleepless night, she dreamt of “a moment of molestation from my youth.” Elsewhere in the book, she also recalls being sexually abused around age 12 by “an authority figure I had been taught to respect unconditionally.”

Around 1996, Needham’s doctors suggested she had multiple personality disorder, and three years later, she became a patient of therapist Patrick Poor, who she claims cured her of the  disorder. She gradually weaned herself off her psychiatric medications and today is “writing, composing, recording music, traveling, and enjoying my family.”

Throughout the book, Needham relates her shame, guilt and troubled thoughts. She profiles her multiple personalities, whom she calls “alters,” by their destructive and positive traits, and records conversations she had with them that reveal their wounds and her attempts to understand the wounds’ effects.

She also includes diary entries and simple rhyming poems (“Yesterday I found relief/ From weeks of toil and strife./ I’ve kept intact my sanity./ I’ve kept intact my life”). Rather than presented in chronological sequence, these are offered as they relate to the subject she’s discussing (marital problems, parenting difficulties, her perfectionism, her exhaustion, etc.) This structure is confusing, making it hard to follow the progress of her disease and recovery.

This isn’t a self-help book with advice on how to survive with mental illness, as suggested by the title. Rather, it’s one woman’s experience, aimed at “primarily those who are struggling,” according to the back cover. With her raw and honest diary entries, Needham presents a vivid first-person account of her trials. Despite its flaws, If You Are Struggling may help others feel less alone in their fight against mental illness.