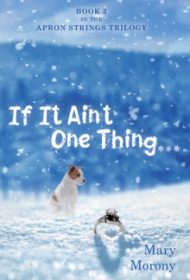 Four generations of a troubled family come together for a Christmas wedding in Book 3 of the Apron Springs trilogy, If it Ain’t One Thing….

Virginia is thrilled when her grandparents, Ginny and Joe, agree that she can marry Alex at their farm in the Blue Ridge Mountains. The rest of this sprawling family is, to varying degrees, wary of the event for many reasons besides Virginia’s Bridezilla attitude about the planning.

Once the guests arrive, a monumental snowstorm blows in, adding to the stress. Over the course of this lock-down, many issues come to light: one character’s deep-seated fear of rejection; another’s tormenting memory of child sexual abuse; a wife’s revelation of spousal abuse and more. Kind and patient Ginny and Joe are the family’s moral center, as is Ethel, the late African-American housekeeper/nanny who for years was an integral part of three generations’ lives.

Written mostly in dialogue, this is a quick, compelling standalone read, although intriguing hints about trouble in earlier generations may send readers to the two earlier books. There are many characters, and keeping their relationships straight without a family tree is not always easy.

Except for Ethel’s remembered words of wisdom written as black Southern dialect, which sounds demeaning these days, the conversations seem natural whether the participants are angry, heartfelt, or teasing (the younger generation curses with abandon). A fresh element in commercial fiction, Joe is a gentle example of positive thinking, the Law of Attraction, the benefit of meditation, and other New Age concepts. With Joe’s ultimatum that raises the stakes as the plot reaches its climax, he also sets off some fireworks as pent-up emotions explode. While the potential for conflict is credible under these circumstances, it’s less realistic that these characters are so quick to forgive and forget.

Nonetheless, readers fond of domestic drama will easily relate to and engage with this family’s struggles to love and accept each other and themselves.