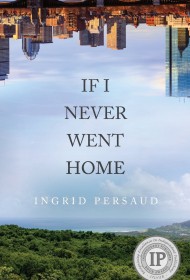 Throughout Ingrid Persaud’s novel If I Never Went Home, two Trinidadians separated by distance and numerous years in age, struggle with familial losses and woes.

Bea Clark, born and raised on the Caribbean island of Trinidad, resides in Boston and works as a clinical psychologist. She receives an invitation to her paternal grandmother’s 90th birthday party from her estranged mother, and Bea’s thoughts drift to and stay in her past—a past that includes a difficult childhood, romantic heartbreak, an unexpected death and her battle with severe depression.

As Bea’s past starts unfolding, 10-year-old Tina Ramlogan’s story begins in Trinidad. Tina is the only child of her single, working mother, Nalini, and has never been told her father’s identity; Nalini has shared the name of this married man with only one person in the Ramlogan family who was sworn to secrecy. But Tina’s life changes on a rainy morning. Over the next 10 years, she transforms into a beautiful, yet somewhat bitter young woman, determined to discover her father’s identity.

Persaud’s writing is superb. She does a wonderful job moving from dialogue to prose and balancing the two forms. She also gives Bea and Tina distinct voices and points of view, and her vivid descriptions of Trinidad and the various foods will make readers hungry and feel as if they are on the island, melting from the humidity.

A minor quibble: Bea and Tina’s character arcs aren’t entirely satisfying. Despite her emotional and professional triumphs, Bea remains docile throughout the story. And even though Tina is often feisty, she continually seems to be on the outside of her life, looking in, rather than an active player.

No matter the weak characterizations, If I Never Went Home is an uplifting read that will remind readers there’s always a light called hope at tunnel’s end.