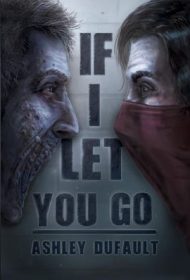 Ashley Dufault’s If I Let You Go imagines a future dystopia where communication is rare and sunlight is non-existent.

The novel begins with an expository prologue recounting the near extinction of civilization in 2025 due to biological warfare that poisoned the water and air. It then jumps approximately 100 years later. Remaining humanity has gone underground, organized into compounds, each its own fraught bureaucracy.

The story focuses on one compound, in which most of the population are low-level workers, consigned to backbreaking work 14 hours a day. This slave-like rank is marked by a genetic mutation that has left them without mouths. Consigned to wearing face masks, they endure IV drips for food and barely communicate with sign language and writing.

Sometimes, though, a worker proves worthy of a change in station; with that comes an operation to repair the facial damage. Such is the case with protagonist Edwin, a naïve 25-year-old. With his changed status, he slowly learns the truth behind lies perpetrated for over a century.

Dufault has given Edwin a distinctive voice. With his sweet temperament, yearning heart and inherent smarts, he makes a compelling hero. Her descriptions are also top-notch, whether detailing living conditions, appearances (“sinking skin around my eyes”), even scents (paperback pages “smell sickly sweet with age”).

But the story reveals some key flaws. The plot can be confusing; for example, readers will find it hard to follow who works for the rebellion and who is only pretending to do so. Sometimes, barely-known characters take center stage. And near the end, plot points disappoint: A desired reunion between two characters seems imminent, then fizzles; a villain inexplicably turns into a cohort; a character’s dilemma set up in the prologue turns out to be immaterial as the story unfolds.

Some revision is required to make this an unqualified winner. Nonetheless, Dufault is a talented writer who has delivered a highly-detailed world, with characters readers will genuinely root for.