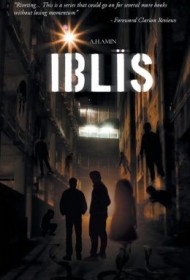 Iblis is a complicated tale set in the near future. It concerns family vengeance, international intrigue and the chicanery of huge financial institutions — all with the unexpected element of the supernatural.

The story revolves around a psychiatrist and Mission Impossible-reminiscent operative named Hassan who is attempting to avenge the murder of his father. Hassan suspects that his father was targeted because he opposed a bank merger involving the shadowy Minerva Group.
Assisting Hassan are eight ghosts (including his mother), who work as intelligence gatherers, lookouts, and escape-route scouters – a job they do with some regularity as the bad guys chase Hassan from country to country.

Iblis offers many of the conventions of a modern thriller (ghosts notwithstanding), but it suffers from several flaws. First and perhaps foremost, the pace often lags — for example, when the alcoholic villain pauses during a climactic flight to take a drink to calm his shaking hands. Such moments deprive Iblis of that sought-after page-turning quality. Second, while it certainly has the complexity of a good thriller, readers will experience a strong sense that they have walked into the middle of a sequel and have to struggle to catch up.

Unfortunately, the narrative also has its share of word misuse. A character with an ugly scar declares she is not “subconscious” (vs. “self-conscious”) about it. In another passage, an injured but alive Hassan is “a sore sight for the eyes” instead of the usual “sight for sore eyes.” While seemingly trivial, these sorts of missteps create speed bumps on what should be an uninterrupted ride to the finish.

Finally, a supernatural flavor to an international thriller is an ambitious undertaking. Readers might find it a plot device too many.

Overall, the story offers some engaging intrigue, but its flaws may create a bumpier ride than most suspense fans are used to.