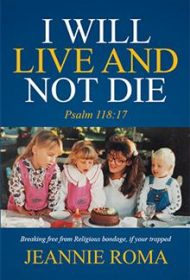 Stories of faith are at their most gripping when there’s something big at stake, and for many of us nothing is bigger than a health crisis. Author Jeannie Roma endured a cancer diagnosis and treatment that included some very painful errors, and all the while she thought her suffering would bring her closer to God.

Growing up a devout Catholic, Roma describes a lifelong desire for religious suffering, driven by a childhood fascination with the lives of saints. Her prayers are cruelly answered when she learns at age 30 that she has Stage 4 cancer that appears to have spread.

Initially delighted to be carrying the cross for Christ, she begins to doubt the usefulness of a long separation from her husband and young children while she’s hospitalized and struggles with severe pain after surgery to remove the cancer. Further medical emergencies arise before she comes to an epiphany: “[God] never asked me to carry a cross, that was a lie I was told. Jesus had already carried the ultimate cross.” Ultimately, she forges a new relationship with God.

Although the author’s message will be valuable for many, Roma’s writing can be problematic. It includes such hard-to-decipher sentences as:  “When I arrived on Monday, they had a problem deciding whose problem it was cancer doctor that snipped the ureter or the urologist.” Some critical misspellings, such as “intervenes” for “intravenous,” also put the onus on readers to discern for themselves Roma’s intent. This unedited approach gives readers a visceral sense of the stress Roma was under, but clearer writing would greatly enhance the narrative.

I Will Live and Not Die starts an interesting discussion about how our lives change when we revise our long-held beliefs. At a mere 47 pages, however, the text feels thin. Ultimately, stringent editing and some expansion of the book’s ideas are needed in order for the potentially powerful material to live up to its promise.