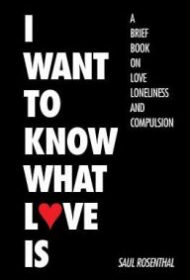 In this odd but affecting memoir, Saul Rosenthal ruminates on the nature of romantic love and why it has eluded him.

The retired English professor culled his short book (text appears only on odd-numbered pages, with large type and generous spacing) from 3,000 journal pages. He indicates at the outset that his topic is love, beginning with reflections on romantic love from Hermann Hesse’s Siddhartha and Shakespeare, and confesses that he always idealized the happy movie marriages that impressed him as a youth during the Depression.

These musings segue into Rosenthal’s painfully vulnerable account of his lifelong addiction to gambling on horses, which forced him to hide his true nature from others, made him “ashamed to love” and left him in crushing debt. Joining Gamblers Anonymous in the ’70s helped him quit intermittently over the years, but he remained addicted to emotional self-abuse.

Rosenthal shows off his writing chops with a superb description of the bars around the racetracks he frequented: the sad clientele and the wares and motivations of the world-weary strippers. An un-self-pitying tone, aided by a thrilling, racetrack-spiced lexicon – railbirds (fans who watch from the track railing); bangtails (racehorses); inamoratos (boyfriends) – makes palatable what is essentially a sad reflection on a failed life.

The book eventually returns to the theme of love and how the author’s gambling both caused and resulted from his failure to find a mate. Citing sources ranging from “Doctor of Love” Leo Buscaglia to anthropologist Ashley Montagu, from Shakespeare to the New Testament, Rosenthal concludes that he is not too old to finally seek love, “our gift of salvation, an ever-enriching blessing the more we share it.”

Rosenthal writes with a sure and appealing voice, but the story is often disorganized, lacking chapter divisions, which could enforce order, as well as specificity about dates and locations. Despite such problems, his book could appeal to readers seeking a glimpse into an addict’s mind and others intrigued by musings on love.