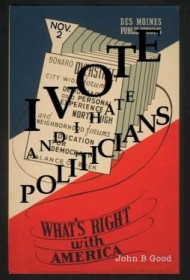 With Congress’ approval rating still dwelling in the teens, it would seem the time is ripe for a loud wake-up call for Washington.

But writing about politics is tricky and can easily devolve into spleen-venting. So it goes with I Vote…and I Hate Politicians. More screed than well-reasoned argument, the slim book wavers between preachiness and vitriol. As the author rails against the rigidity of most politicians —especially the Tea Party Conservatives — he seems unaware of his own my-way-or-the-highway tone as he outlines a fantastical solution to revamp America.

John B. Good calls the current crop of politicians “adolescents gone wild” and contends the nation is headed for doom because its leaders (with the exception of President Obama, whom he favors) are deeply corrupt. To his credit, he seems well-versed on current events and offers a plan for salvation rather than simply complaining.

But what a plan it is: Other than the president, he sees no reason to elect officials to run government. Congress and others would be forced to go through a hiring process like any other business. Simple majority rules, and all laws and initiatives would be voted on directly by the people who are notified through cellphones, televisions or other technology when it’s time to make a decision.

Good advocates that if someone severely harms another more than once, they should be locked up for life. He suggests closing the borders completely, ramping up the space program to provide jobs, and proposes a four-day work week with a requirement to spend the day off either helping those less fortunate or attending music concerts.

There’s no doubt that Good is sincere, and there is some real wisdom here about taking responsibility for one’s own actions and helping others. But the writing, while attempting to be conversational, is plodding and self-important. This utopian vision might have been fun to contemplate, but the author’s stridency is likely to be offputting to many readers.