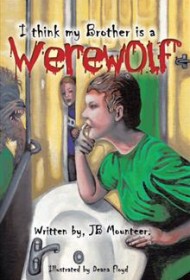 This amusing book for young readers combines a story about imagination run amok with a preview of what adolescence has in store. It’s clever and funny, which considerably lessens the scare factor.

Young Jorey’s two best friends dare him to watch a scary movie about werewolves, and he goes along despite already harboring a touch of werewolf-phobia. Soon after, his beloved older brother, Jaden, starts to sprout facial and underarm hair and complain of muscle aches. In Jorey’s mind there can be only one explanation: his brother is one full moon away from full-on lycanthropy. Jorey enlists his friends to try to save Jaden, and their funny attempts complicate life at home.

I Think My Brother Is a Werewolf mines for laughs the children’s misguided attempts to “cure” Jaden. Why shaving him in his sleep would help is anyone’s guess, and why that should require putting earmuffs on him is equally ridiculous, but it’s impossible to picture without chuckling.

Jorey’s parents’ general oblivion as he and his friends sleep over, hide the family’s silverware and attack poor Jaden with razors is also humorous. Jorey’s mom notices the silverware is gone but just goes out and buys plastic forks. When the silverware mysteriously returns, she simply packs up the plastic. When the shaving doesn’t end as planned and Jorey has to come clean, his dad tells him what’s really going on and that pretty soon he’ll be experiencing similar changes.

J.B. Mounteer’s writing is clear and understandable, and Deana Floyd’s woodcut-style illustrations support the plot nicely. The story flows logically, the vocabulary isn’t too challenging and the scary movie premise makes the humor more exaggerated and accessible. Werewolf is silly fun, but it’s also a nice lead-in to a discussion of growing up and changing.