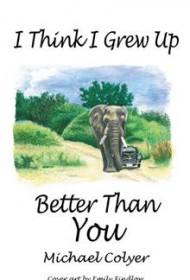 If the 1950s was a time of innocence, a time when kids could roam freely without paranoid parents checking their every move, then the 1950s in Africa must have been something close to paradise for adventurous youngsters. At least that’s the impression given in this childhood memoir by Michael Colyer, whose family emigrated from England to Northern Rhodesia (now Zambia) when he was five. Colyer and his coterie of boyhood buddies – reared on a rich diet of Tarzan tales and equipped with powerful imaginations – spent the next half-dozen years making the most of their African playground.

Colyer can spin a great yarn and certainly has the raw material: electrifying encounters with crocodiles, a hippo, a hammerhead shark, a young bull elephant, and an assortment of deadly snakes. The young daredevils also discover quicksand and the thrill of surfing down huge drainage ditches after a heavy tropical rain storm: both times they had narrow escapes, whereas two other boys, on later occasions, were not so lucky.

Colyer explains in great detail how he and his friends built an elaborate treehouse, swings and a zip line, while mastering such manly pursuits as using catapults, an air gun, and canoeing. Such is the enthusiasm with which he relates these entertaining tales that the book’s main audience may well prove to be youngsters of around the same age as these 11 and 12-year-old protagonists.

The book is not without its flaws. Colyer often tries too hard to be clever or funny (and ends up being neither); he’s not overly concerned with grammar and spelling, and most curiously, he tends to drop two or three italicized words into almost every other sentence, which is highly distracting.

Still, none of that may matter much to young readers hooked on the action and excitement of growing up in Africa.