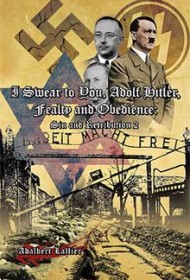 Adalbert Lallier, an economist and retired college professor, has constructed his novel around a true event – the killing of seven Jewish prisoners that he witnessed in the final days of World War II. He was a 19-year-old Waffen SS officer in training at the time, and in real life he helped track down the man responsible. The former Nazi, Julius Viel, was eventually convicted of the war crime.

Lallier draws on these events for I Swear to You, which traces two fictitious Viennese families, the Rainers and the Laubers. At the center of his story are Karl-Johann Rainer and Bruno Lauber, once close friends. Rainer buys into Hitler’s ideology and becomes a high-ranking Nazi officer; Lauber winds up in a concentration camp where he is murdered by, as it turns out, his onetime best friend. The story then follows Lauber’s daughter as she tries to find her father’s killer and avenge his death.

Lallier’s presentation, consisting of fictional material bookended by factual material, makes the book choppy. There’s little scene description, character development or dialogue. He also sows confusion with a courtroom drama in which he gives the reader two possible endings. In addition, the book has numerous German expressions that the reader can only find in the 10-page glossary at the end.

The event the novel is based on — Lallier’s presence at the killings — could have been the basis for an interesting and powerful autobiography. The fact that he built a fictional novel around it lessens the impact of the seminal event. As a result, the book may interest hardcore students of World War II, but its flaws will hamper its ability to attract a wider audience.