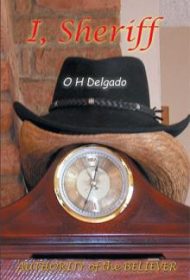 In I, Sheriff: Authority of the Believer, author O.H. (Oscar) Delgado explains an event that shook him and how he chose to interpret it, among many other tangential stories.

Delgado writes about passing by a bar while traveling for work. He notices a drunk man inside with whom he never makes eye contact, and the man suddenly shrieks, “No, Oscar, waaaah!!! Leave me alone!” Delgado comes to believe the man was possessed by a demon that reacted to his presence. The book goes on to discuss Delgado’s church and his conservative beliefs, and includes several quoted Bible passages to support his themes.

The narrative is broken up into individual topics, but the decision to change typefaces, formats, and sizing repeatedly makes it hard to tell where one ends and another begins. It also makes the overall reading experience exceedingly choppy and challenging.

Delgado’s tendency to leapfrog from topic to topic—readers will feel the author’s ideas are tossed together, rather than carefully curated—is similarly jarring. For example, a letter he wrote to news broadcaster Jim Lehrer after watching a presidential debate runs into a story about quitting smoking and a capsule review of the movie The Insider. The connection between the three seems to be the influence of tobacco company money on politics, but readers can only guess at how that relates to the rest of the book.

The faith of the devout is nothing to trifle with. Delgado obviously feels strongly about God and the state of the world and believes his dreams and experiences tie into that belief. Unfortunately, I, Sheriff doesn’t make those beliefs clear to readers, who will likely find this offering a baffling read. Ultimately, the text requires continuity in its storytelling and less variation between fonts to make a coherent statement.