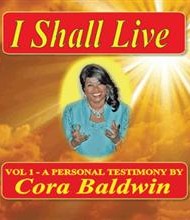 At the age of 60, Cora Baldwin is reflective about several near-death experiences that have both tested and strengthened her faith in God. I Shall Live is “Vol. 1” in her personal testimony.

In this slim book, Baldwin describes her complicated “breached” birth at the hands of midwives who mistook her for dead. Her mother revived her and from that day forward told Cora that God had placed her here for a reason. Since then, she’s suffered high blood pressure, diabetes, a series of heart attacks and other traumas, but has come out the other side alive and kicking. During one of her near-misses, she recalls that she didn’t see the white light so many who nearly die remember, and thinks it’s evidence that God still had plans for her.

At just 23 pages and full of photographs, I Shall Live is not long on words. It’s therefore troubling that it’s so overstuffed with spelling and grammatical errors. On page 10, for example, Baldwin is diagnosed with “diabeties,” told she should have been in a “comma” rather than awake and alive, and must deal with “a hugh supply medications.” One or two errors of this sort in a full-length memoir would be noticeable but not significant, but it’s hard to find a single page here that’s not riddled with errors.

Baldwin clearly has a story to tell, about which she feels passionate, and her faith shines through despite all. For readers to catch that fire, however, she will need to rewrite and edit strenuously to make the reading experience as simple as possible. I Shall Live is heartfelt, but challenging to read.